In it, Ra is waited on by an entourage of child attendants, who, when he is threatened, are trained to instantly act as a human shield.

Of course, when they do that, our guys stop their attack. They're not going to shoot a bunch of children. 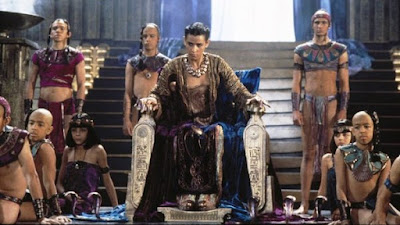 However, all's well that ends well. Ra is finally defeated, and Earth is saved, when O'Neil nukes his ship and kills him.

And, in the process, presumably kills those same children (and the cat).

This made me think of Hiroshima. It has been argued that the bombing was justified, because of the many more lives it potentially saved.

However, would those who ordered or carried out the attacks have considered it an acceptable loss of life if they had had to individually execute all of those tens of thousands of civilian men, women and children? Or even mow a crowd of them down with machine guns?

It seems to me that, if war is considered to be ethical at all, the more hands on the better. If you are fighting hand to hand with an enemy who you can see (and who also has a fair chance of killing you) you know what you're doing, and you're putting your life on the line for your cause, whatever it is.

Throwing death from a distance at unseen enemies dehumanises them - and hardens you.

Questions I was asked in Sunday School yesterday

What was the date of the Flood? (Note, the lesson did not refer to the flood, even obliquely).
Was the Temple (Herod's) bigger or smaller than the Colliseum?
A few weeks ago, we had: How could Jesus give up his life? He was on the cross so he couldn't do anything to kill himself.
They certainly keep us on our toes 😁
Posted by Kirsty at 00:22:00 No comments:

To celebrate our church's Good Friday meal restarting after a 2 year gap.
A lot shorter (and cheerier) than the previous music video I posted!

This is good (It's an hour long)

The details are different, but both believed they were superior to other people, and therefore had a right to take their land and mistreat or even exterminate anyone who got in their way.

I can see only two real differences:

*Obviously it's not only white people who act in this way - people all over the world have done so since the beginning of time. But I don't know enough about that to comment, and it's not the point of this post.
Posted by Kirsty at 13:23:00 No comments: