Recently I've been reading a great site where self publishers submit their book cover designs, so that people can critique them and they can make them better - and not end up with a cover that screams 'self published'.

One of the books recently was a Christian book, and everyone seemed concerned that it didn't look 'Christian' enough. Which puzzled me, as there are so many genres of Christian books that I would expect them all to look different. And I certainly wouldn't expect any explicitly Christian imagery on them.

Anyway, I thought I'd check it out. So I did a quick survey of Christian book covers - ones on display on my church bookstall, and ones from my own shelf that have new-ish covers (after 2000).

Photos below, with captions which are not really relevant to the question :-)

Conclusion: Out of 37 books, only two had explicit Christian imagery (a Bible and a small cross).
Typographic covers with no imagery at all are very common.

Of course, a selection of books from a different church (or even the same church in a diffeerent month), and from another individual's book case might look completely different.

[Edit: I was looking at imagery only, someone pointed out that the titles of most of those books do make it clear it's a Christian book. The problem is if nothing does.]

In the absence of a rubber mallet, a large broom makes a suitable - if unwieldy - subsitute.

An evening dress - with pockets!

I've been watching Madam Secretary as a wee change from Stargate.

This is a sensible evening dress. Elegant and practical. 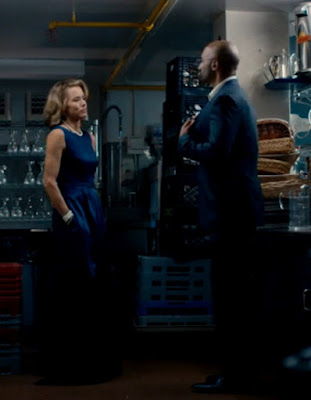 Thought I needed a completely frivolous blog post for a change!
Posted by Kirsty at 22:32:00 No comments:

A captcha consisting of fluorescent green numbers scattered on a white background, heavily scored through with random black lines, may well be unreadable by evil robots.

It's certainly unreadable by humans.

As I pointed out previously, when you do the maths, Jacob was 77 when when ran away. BUT the patriarchs lived a really long time, so maybe they didn't age as quickly?

This affects how I draw them. Jacob and Abraham were more or less ages with each other when they left home, yet we think of - and draw - Jacob as a young man and Abraham as an old man. Which makes no sense.

I set three points:
Then I made a curve, and drew lines.


What I like about this is that all the age equivalents (except the ones that are meant to be laughable) seem sensible. People die at sensible ages. Jacob gets married late, but not ridiculously old (George Clooney, not Hugh Hefner 😀).

Now I'm going back over my other patriarchs PowerPoints to make greyness of hair a bit more consistent - though of course people vary widely.

Here's a list if you prefer. Equivalents in brackets.

If all of the American presidents stood on each other's shoulders, they would be slightly taller than the leaning tower of Pisa, but shorter than an unrolled toilet roll.
(Info from Thing Explainer by Randall Munroe)

I wasn't happy with the angel's clothes, so I redid them in clip studio (I'm not yet comfortable doing a lot of inking in it, but it's fine for small amounts.)

This is some stuff I worked out ages ago.

Sometimes we can get the completely wrong idea about how old people in the Bible were, or how long stuff took. But sometimes all it needs is careful reading and simple maths.

Here's some working for Jacob.

Here's a chart showing how you can fit the birth of 12 children into 7 years. 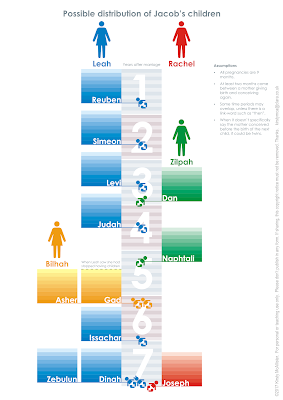 This means that what we are often told - Joseph was much younger than his brothers - is wrong.

And here's a table showing how old Jacob and each of his children was at each point in the story. 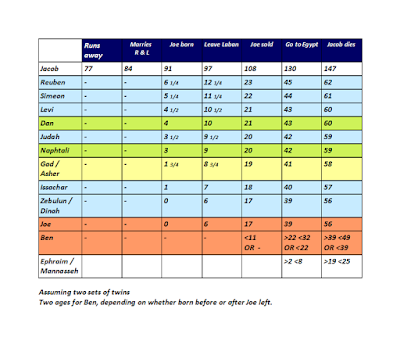 Jacob seems very old - but presumably, since they lived so long, they also got older slower. We could perhaps imagine Jacob as being the equivalent of in his 30s/40s when he leaves? I need to do more work on this. [Edit - I have now done so, and he's in his mid 50's!]

Which also has implications for how we imagine Abraham - he was 75 when he left Harran. And if Jacob wasn't yet old at 77, Abraham wasn't yet old either. And all it says about Sarah at this point (aged 65) is that she was unable to have children - not yet that she was too old.
Posted by Kirsty at 21:24:00 No comments: 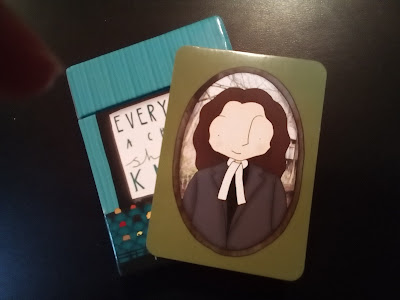 Such an important thing for church kids to learn.
Posted by Kirsty at 20:31:00 No comments:

Another video - inking the same illustration as the previous pencil video.
Real time - inking is much quicker than pencils, if I do the pencils properly.