Now Thomas (also known as Didymus), one of the Twelve, was not with the disciples when Jesus came. So the other disciples told him, ‘We have seen the Lord!’

But he said to them, ‘Unless I see the nail marks in his hands and put my finger where the nails were, and put my hand into his side, I will not believe.’

A week later his disciples were in the house again, and Thomas was with them. Though the doors were locked, Jesus came and stood among them and said, ‘Peace be with you!’ Then he said to Thomas, ‘Put your finger here; see my hands. Reach out your hand and put it into my side. Stop doubting and believe.’
Thomas said to him, ‘My Lord and my God!’

Jesus performed many other signs in the presence of his disciples, which are not recorded in this book. But these are written that you may believe that Jesus is the Messiah, the Son of God, and that by believing you may have life in his name.

It's strange - an hour spent reading a book (especially when you really should be getting on with something else) goes really quickly.

When you have to wait twenty minutes for the drain unblocker to work, every minute seems endless.

Finally got the illustrations of Jethro's daughters done: 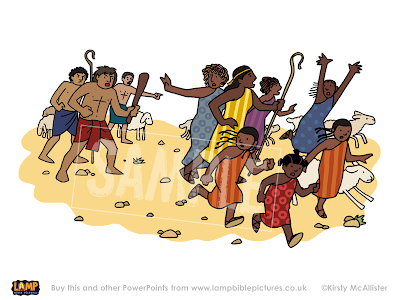 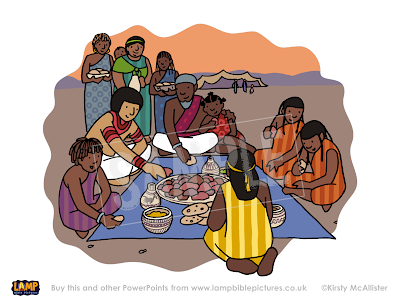 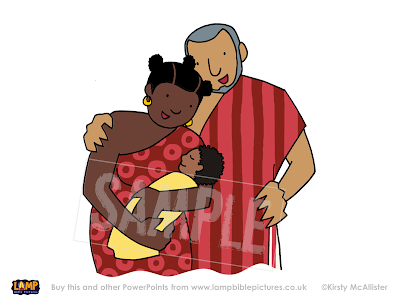 These ones needed a bit of thought:
The pottery in the meal scene really is Midianite (roughly).
Posted by Kirsty at 22:42:00 No comments:

Amazing what you can buy on Amazon these days

I recieved an email with the subject line:

Here's an activity we did last Easter.

The point was to show that the temple curtain symbolised our sin separating us from God, and that Jesus' death made a way for us to get to him. 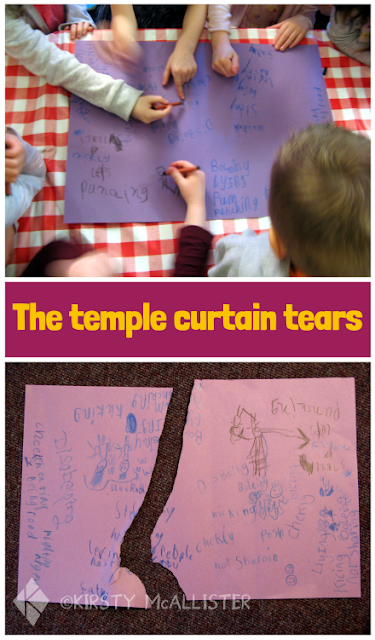 During the story, I explained:
"Jesus was dying for us. We have all done bad things and don't deserve to be God's friends."
So I got the children to write/draw sins on a big sheet of paper*.

Later, at the point in the story where Jesus died:
"In the temple there was a curtain. God had a special room behind, that no-one** was allowed to go in, to remind people that God is good and we can't come near to be his friends.

"When Jesus died, the curtain tore - "
then I suddenly tore the paper in half. That startled them!

"Now we can be God's friends."

*This actually took quite a long time, as they are just beginner writers. I told them it didn't matter how they spelled them, but they still wanted to know. Also they didn't want to stop writing.

**Well, technically not no-one, but one person in the entire world, once a year, is pretty near no-one. Of course, that one person once a year was very significant, but there really wasn't time to go into that.
Posted by Kirsty at 17:46:00 No comments:

Wake me up (Amnesia)

"Won't you wake me up when my faith is asleep?
You never let me go;
bring back my memory.
You bring these bones to life* when you breathe into me.
Remind me how much I need you
when I get amnesia"


*At least, I think that's what it says - all the lyrics I've found online say 'fools to love' which makes much less sense! 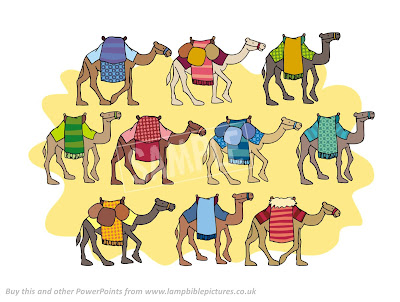 Me: I cheated a bit with this picture: I just drew three camels and then copied them and coloured them differently.
11-year-old: That's not cheating; that's logic.
Posted by Kirsty at 22:07:00 No comments:

And finally, the story of God helping the Israelites to beat the Amalekites. 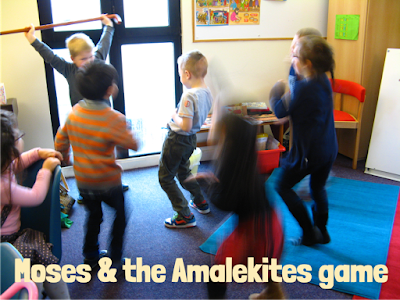 You will need:
What to do:
Essentially you are playing musical bumps, but instead of music you have a stick.
They loved this!

The only issue was that sometimes the 'fighters' got tired before Moses' arms did! I wonder how that worked out in real life? Of course, the adrenaline of having real people trying to kill you might make you keep going...
Posted by Kirsty at 17:15:00 No comments:

Water from the rock craft

We've been learning about Moses recently.

For the manna in the desert story I had to hastily improvise a visual aid, so I used torn-up paper hankies. 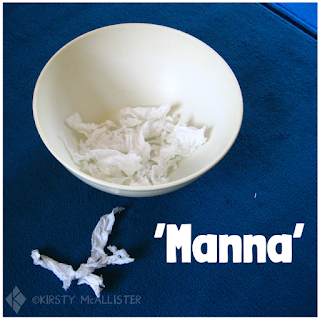 That bowl really holds an omer! It seems a huge amount for a person, but as it was evidently fairly insubstantial it probably settled a lot.

It was interesting how vague some of the children were about where our food comes from. I explained that quail were birds you can eat, like chicken. Some of them were  very surprised that the chicken we eat comes from a bird! 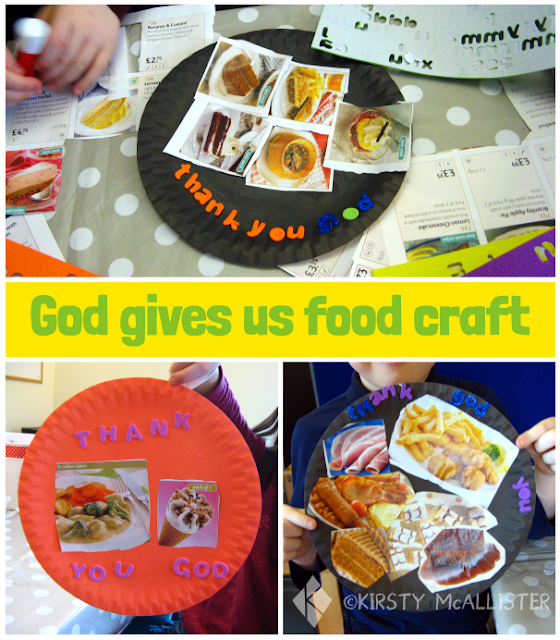 So many children she didn't know what to do

It was very inconsiderate of Bible people to have so many children. I'm drawing Jethro's daughters being chased away from the well. Seven girls! Plus an unspecified number of bullies.


Although Jacob's family is worse, as you keep on having to draw twelve of them.