You will need (per person):
What to do:
P.S. Don't be put off by using gelatine - it's actually even easier than using jelly cubes.

The KitKat finger is - believe it or not - almost the same proportions as the ark. And, as an added bonus, when you bite into it, it has three floors!!!

In search of beauty

God holds the key of all unknown,
And I am glad;
If other hands should hold the key,
Or if He trusted it to me,
I might be sad.

What if tomorrow's cares were here,
Without its rest?
I'd rather He unlocked the day,
And, as the hours swing open, say,
My will is best.

The very dimness of my sight
Makes me secure;
For, groping in my misty way,
I feel His hand; I hear Him say,
My help is sure.

I cannot read His future plans;
But this I know:
I have the smiling of His face,
And all the refuge of His grace
While here below.

Enough; this covers all my wants;
And so I rest;
For what I cannot, He can see,
And in His care I saved shall be,
Forever blest.

Here's a Jesus figure to go with the 12 disciples character sheet.
A couple of people have asked for one.

After posting this, I realised that it may not be what people are expecting when they ask for a picture of Jesus! It's not your typical picture, but it's how I'm drawing Jesus at present, so I'm used to it.

There is a reason for all the things that might be considered 'strange'.

There's nothing in this picture that would tell you it was Jesus unless you knew. This is deliberate:

Was looking through some stuff, and came across this. 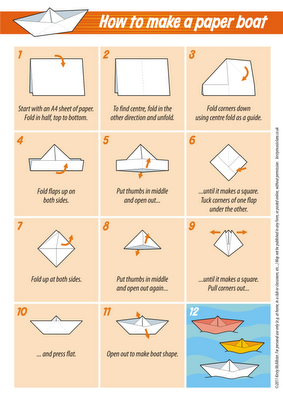 I use a graphics tablet with my computer. 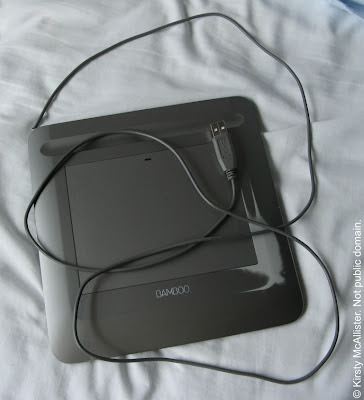 However, carrying it back and forwards to my studio was not doing the flex any good. 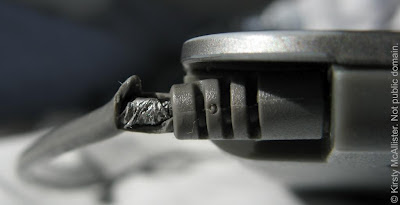 I tried taping it, but the tape came off.  I mentioned it to my mum, and she said a friend had given my dad a free sample of this mouldable rubber stuff (Thanks, Susan!)


It really works! It's called Sugru, and is just like soft Plasticene or playdough. But if you leave it for 24 hours, it turns into solid, but still bendy, rubber! (Please excuse excess of exclamation marks, bur it really does deserve it!) 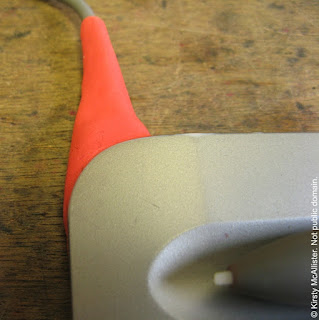 Since you have to use a whole little packet at a time, I also replaced the rubber feet, as all but one were missing. 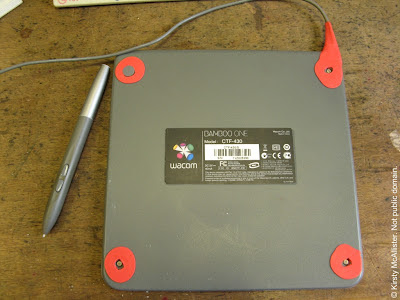 This will make my tablet last a lot longer.

Comes in several colours: I chose red to go with my laptop.
Posted by Kirsty at 21:22:00 2 comments:

Email ThisBlogThis!Share to TwitterShare to FacebookShare to Pinterest
Labels: work

A couple of ideas for if you want a group of children to make a card for someone. Particularly if you don't have loads of time, and need something that will be simple and effective.

In both cases, I used a sheet of A3 card folded in half, to make an A4 card.

This one was a goodbye card for a Sunday School teacher. 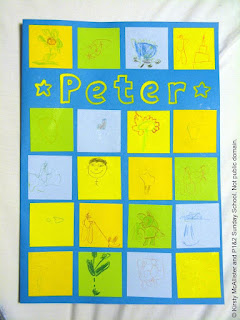 I have done a similar one as a wedding card (can't find a photo). In that case, I got them all to draw one or more hearts on the squares.

This one definitely suits a short name. 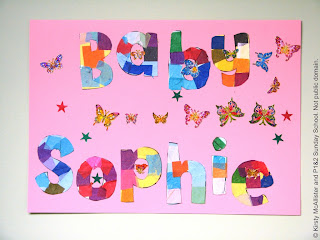 Somehow it had never occurred to me that they actually wash the roof of Central Station. 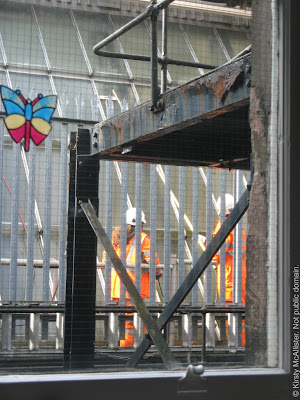 In case it's not very clear, they're using a brush thing on a long handle which is attached to a hose, with water going through it.
Posted by Kirsty at 19:59:00 No comments:

Email ThisBlogThis!Share to TwitterShare to FacebookShare to Pinterest
Labels: photo

Just found my picture on another image library. This one seems far more legit - it has contact info, and legal stuff about copyright. However, my picture is on it completely illegally. This may not be the fault of the site owners of course.

I've just spent over 5 hours going through my blog putting a copyright notice on each picture.

After reading this post, I thought I'd just check the internet for a few of my pictures. I did a reverse image search on my 12 disciples picture (as that's by far the most popular page on this blog) - and I discovered it was on some image libraries.


I'm fine with people downloading the picture for personal use - but I want them to do it from my blog, not a random image library. And certainly not a dodgy image library which brings up loads of popup ads and which my virus scanner warns me has threats on it!

I've probably overdone it now (I can't see why anyone would want to steal some of the pictures!). But you can't be too careful.
Posted by Kirsty at 17:23:00 No comments: