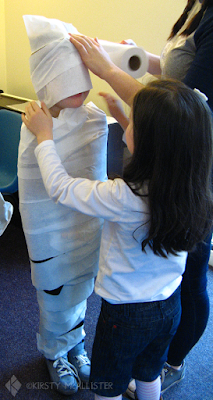 Jesus said to her, ‘I am the resurrection and the life. The one who believes in me will live, even though they die; and whoever lives by believing in me will never die. Do you believe this?’

What's in the parcel? 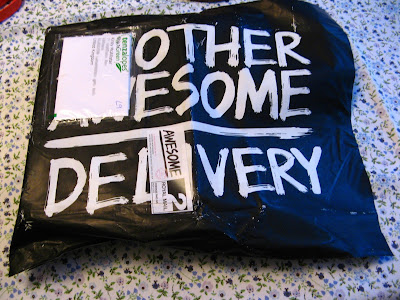 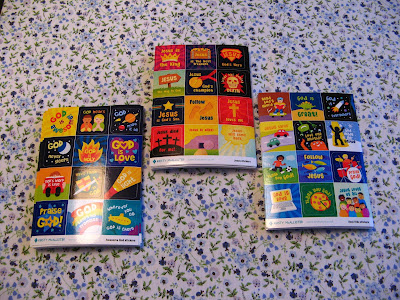 Kids' christian stickers!
My designs.
Not twee or girly.
Available as soon as I finish the shop set-up
Posted by Kirsty at 18:15:00 No comments:

Different ways I have drawn Adam & Eve through the years :-)

Sorry I don't have dates for the earlier ones. First one I'm guessing was around 2002*.

I'm now thinking of making Eve an exact clone of Adam (save obviously the necessary chromosomes).

*I started illustrating for GT in 1998 - illustrations were black & white, and teachers had to colour them, which is what I've done here. The Visual Aids started being printed in colour in 2003. That was Abraham, so this would be the beginning of that syllabus cycle. If you care :-)
Posted by Kirsty at 15:20:00 No comments:

Adam was not put in the garden just to frolic around on an endless holiday, but to work. (Totally fulfilling work, of course.)

We talk about 'unspoiled nature'. But actually a managed estate was more like what God was aiming for in his creation.

Adam was also put there to keep/watch over/guard it (depending on translation). Not sure that allowing someone to inveigle your colleague into disregarding a direct command of your employer, and then following suit, comes under that job description...

Interestingly, the same word is used for the cherubim at the entrance to the garden after the Fall. Adam was put into the garden to guard it - now God has to send cherubim to guard it (specifically the Tree of Life) from him.

We often hear that Adam & Eve were only given one rule. But we don't know that. We are only told of one rule - because they broke that one. Maybe there were others.

Eve was created to be Adam's helper. People often read this (either approvingly or disapprovingly) as meaning Eve was subordinate, inferior, a mere assistant or even servant. But the word `ezer is used 21 times in the Bible. Twice referring to Eve; three times for other people, and the remaining 16 times referring to God himself being the helper of a human or humans!

This is clearly a difficult word to translate, as it is translated in many ways: 'meet', 'comparable to', 'just right', 'suitable', 'fit for', 'corresponding to', 'his complement', 'his counterpart', 'his like'.

Looks like either likeness or perfect compatibility (or both) is the point.

Of course, 'like' does not mean 'identical', as should be obvious just by looking :-) Equal and complementary.
Posted by Kirsty at 11:18:00 No comments:

Just about to start illustrating the creation of Adam & Eve. Hard to do well without full frontal nudity :-)

Email ThisBlogThis!Share to TwitterShare to FacebookShare to Pinterest
Labels: creation

Blind man at the pool of Siloam

On Sunday we did the story of Jesus healing the blind man.

Here's a game we played: 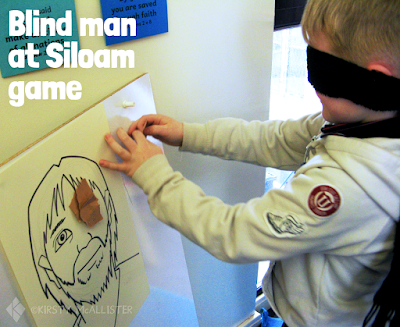 Like pin the tail on the donkey. The children were blindfolded, and had to place the 'mud' (brown paper) on the man's eyes.

Not sure I want to try one of the recipes from my Grandma's recipe book. It starts by boiling macaroni for 30 minutes.
Posted by Kirsty at 11:42:00 No comments:

Found an old recipe book of my Grandma's.

Was amused to find a recipe for imitation mock turtle soup.

Finally got a new PowerPoint finished - it seems to have taken forever. 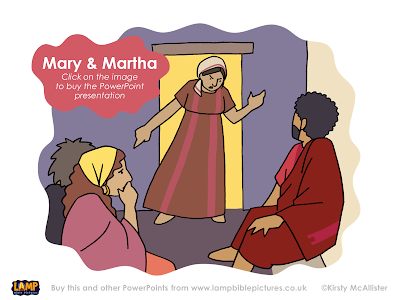 I find it much easier to be like Martha than Mary - and much easier to draw pictures about the story than put it into practise...
Posted by Kirsty at 22:29:00 No comments:

Welcome to my new artist's models 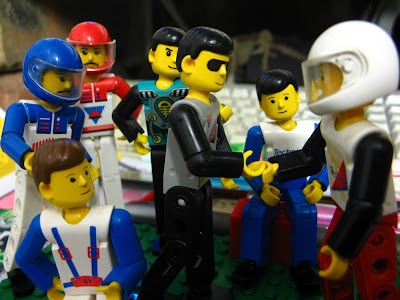 When I was looking for some lego figures, I came across one of my Lego Technic men.

And I thought: these would be great for posing tricky illustrations. They have a wide range of movement - even the ankles have ball & socket joints (though, oddly and annoyingly, there is no articulation of any kind at the waist). Also, they are similar sort of proportions to my cartoon figures.

The trouble was, I could only find one. So I looked online, and discovered Brick Owl - a Lego marketplace which sells second hand lego pieces.

So now I have 7 models ready to help me!

It means, for example, that I can try out a scene from different angles: 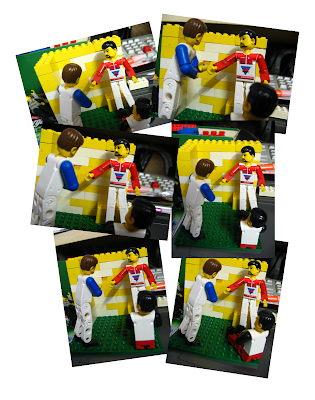 In the middle of a lesson on the feeding of the 5000, a child announces: I saw a woodlouse.

I'm not quite sure where the connection was...

The feeding of the...

Two guesses from our class this morning, when asked how many people they thought were in the crowd.

The TVs in the cafe are muted, with subtitles. The subtitles are not always accurate.

For example, I was interested to read that 'leaving the EU will mean leaving the European Comic area'. No more Tintin?