How To Get Stuff Done

A thought I had:
In Narnia, people often address humans as 'Son of Adam' or 'Daughter of Eve'.
In The Silver Chair, this confuses Jill, as she comes from a non-religious background and hasn't heard of Adam and Eve.
However, while Aslan himself often uses 'Son of Adam' or 'Daughter of Eve', he never addresses Jill this way. He knows her, and where she's coming from, and always calls her simply 'Human Child'.
I like that.
Posted by Kirsty at 13:12:00 No comments:

C.S. Lewis on The Hobbit

Think before you drink

A poster I made for a friend. Those are real bottles/cans, and it's real sugar.
Quite scary, some of the amounts!

The sugar is in little boxes I bought from the British Shell Collectors Club, so they'll hopefully last longer than the examples I've seen with the sugar in bags.

It was meant to have blue lettering, but I discovered at the last minute I had no blue card. So I tried green, and I think it actually looks nicer, so that was good. I cheated and cut the letters on my Silhouette machine - that's not why I got it, but might as well use it. It's certainly paid for its (second hand) price!

The bottles/cans are attached with a strip of clear acetate wrapped round them, which goes through a slit in the cardboard. And a glue dot stops them wobbling.

Teacher: Why do you think Joseph's brothers were upset when the silver cup was found in Benjamin's sack?
5-year-old: Because they didn't have silver cups in their sacks. 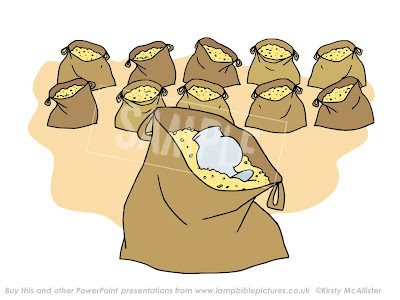 Thought you might like to see the final artwork.
(Apologies for paranoid copyrighting, but when it's for someone else I feel I really really need to be careful)

I really need to practise drawing people, though. Then I wouldn't find this kind of more realistic drawing so difficult.
Posted by Kirsty at 22:21:00 No comments:

Life would be soooooo much easier for poor biblical illustrators if historical people wore jeans and long-sleeved t-shirts (they follow the shapes of arms and legs, but are loose enough to conceal the muscles, and can even be simplified to tubes, if that fits your style), preferably with trainers (which cover the feet with a chunky and simple shape).

Instead we're stuck with this sort of stuff:

"A principle of moral psychology is that “morality binds and blinds.” Part of what we do when we make moral judgments is express allegiance to a team. But that can interfere with our ability to think critically. Acknowledging that the other side’s viewpoint has any merit is risky—your teammates may see you as a traitor."

Particularly ridiculous when we're all Christians, so there is no 'other side' - just a variety of views (some better than others) on the same side. Calvinists and Arminians, I'm looking at you :-)
Posted by Kirsty at 13:27:00 No comments: