I was telling this story on Sunday,  and I was using the Go Teach visual aids, which I drew.

It was quite a tricky picture to make clear. The point of the story is that it's such a dense crowd that no-one notices the lady creeping up to touch Jesus' cloak. But, of course, while the picture has to look confusing and busy, the children in the class do have to see what's going on.

One of the ways I did this was to use colour. Colour is not just decoration. It can be used for clarity and emphasis, and for atmosphere. In this case, clarity was the main issue.

Here's what I did to make Jesus and the woman stand out: 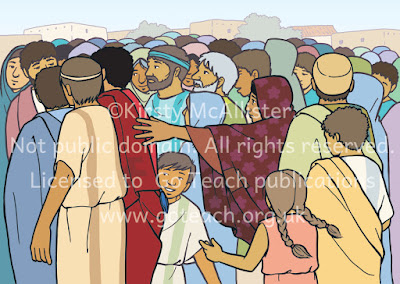 Just for fun, I made another version of this picture, using colours to make the picture harder to understand. Here it is: And here's a comparison - it flicks from one to the other:

Half shut your eyes - in which picture can you see at a glance who the main characters are and what's going on?


Of course, all of this is subconscious as far as the viewer is concerned. You don't analyse the colours - you just look at the picture. But it's important, because it makes such a difference to your understanding.


Actually, this post happens to fit really well with the quote I posted on Saturday. That was by a colourist - someone who makes his living by colouring other people's pictures (much more complicated colouring than I do!).