Out of all the pictures I looked at in my previous post, only two seemed to show Adam & Eve as non-white - one looked a bit middle-eastern, but only one (Jane Ray's beautiful book) gave any indication that these were meant to be the ancestors of the entire human race. 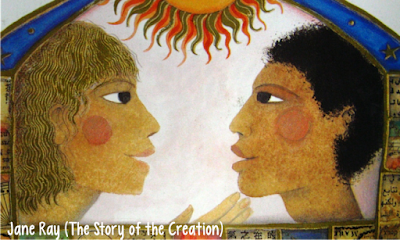 This is astounding! I can understand this in secular books, where they are just telling a traditional story and haven't really thought about it - although Jane Ray herself is non-religious.

But Christian publishers and illustrators should certainly be thinking a bit more.

I'm aware that people have different views of the literalness of this account. But even if you look on it merely as a Hebrew folk-tale, it's a Hebrew folk-tale about the ancestors of the human race, and ancient Hebrews were obviously well aware of different ethnicities!

If we say everyone is made in the image of God, but then show the ancestors of the human race with genes that could only produce white people, what are we actually telling kids?