Teaching myself by accident

In Sunday School last Sunday I was teaching the children about the tabernacle, which is a lesson I like for all kinds of reasons: 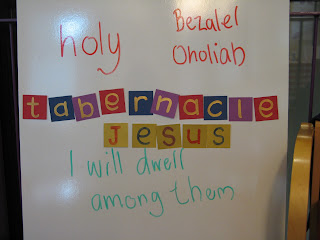 Those were the things I was expecting to teach (on a 5-7 yr old level of course) - and I did.

But I also taught the children - and myself - something else I hadn't planned.

I showed the children a picture of the High Priest; that was Moses' brother Aaron - did they remember Aaron? Blank faces. So to jog their memories, I pointed to the pictures on the wall. Look - there's Aaron with Moses talking to Pharaoh. I looked to see if there were any others. Oh yes, there was another - and for a split second I nearly passed over that one. Because there was Aaron, making the golden calf. We don't want to dwell on that one - focus on the good things he did.

But in the next split second I realised that didn't make sense.  Instead I pointed out that, while Aaron did some good things, he also did some really bad things - but God still chose him and gave him the very special job of high priest, to help the people meet with God.

Aaron - the one who made the golden calf! Aaron!

And I realised that's the point. Brushing Aaron's sins under the carpet doesn't make the story better. God's grace to a man who did some really stupid and bad stuff makes it better. Because he does not treat us - any of us - as our sins deserve.

Which fitted in with a lot of the other things in church that day.

It's a bit like Paul. He was hardly your typical candidate for an apostle. In fact, he described himself as "a blasphemer and a persecutor and a violent man ... the worst of sinners". But he considered that God had chosen him not despite this, but actually because of it, to show his great mercy.


"Now to the King eternal, immortal, invisible, the only God, be honour and glory for ever and ever. Amen."

Beautiful and inspiring post. I had never really looked at those two personages from the Bible in that way. I enjoy your art work, too.