I read a recipe for stuffed french toast here. She used strawberries.
So I tried it, but with spinach instead. 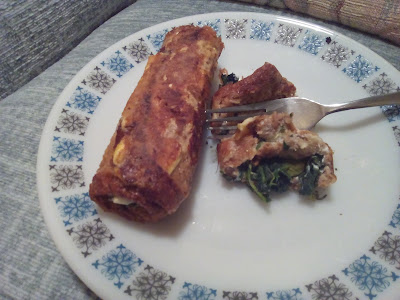 I used frozen spinach, added some spring onion, Lea & Perrins and ground black pepper. Microwaved for a couple of minutes, and then pressed in a sieve to drain. Followed the rest of the instructions (Obviously don't put sugar/syrup/vanilla in it! I just used an egg with nothing added)

Email ThisBlogThis!Share to TwitterShare to FacebookShare to Pinterest
Labels: recipe