After a bit of trial and error, I managed to trace a photo (another one) with nice clear computer lines. And worked out the layout of people. Something I read said the block was a podium for the speaker, so I put Paul there.

And then I inked it (twice, because the first one wasn't good) and coloured it...

And realised I'd been so concerned with the historical accuracy side that I hadn't bothered to check if it actually made a good picture. Which it doesn't. Paul's head almost disappears against the fussy steps behind it. Grrrr.

So I decided to make a Sketchup model. Which did take a wee bit of time, because I'm not over-familiar with how to do anything that's not really basic. Those steps confused me! But anyway, I got it done, and slotted in a few wee figures to get a rough idea while I played about with viewpoints. 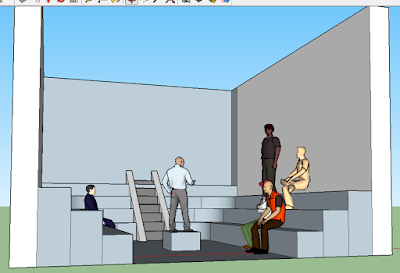 Still wasn't quite happy with the steps, so Googled to see if I could get some better pictures. Which I did. I also, however, found a detailed article which described the step thing at the end as the seat for the teacher. This makes a lot of sense. Back to the drawing board again...

It's not even that important a picture. I could have just shown a talking head or something, but I wanted to add a bit of interest.

Now I'll go and amuse myself with some nice futuristic science fiction before I go to sleep :-)


*Which is, being interpreted, I'm obsessed by it. But they say there's a fine between love and hate.
Posted by Kirsty at 22:04:00